Last weekend my law-school roommate, who lives in New Jersey, brought her daughter, Mieko, over to play with Martin. Mieko is five months older than Martin, and the most wonderfully bossy little girl, and one day she’s going to marry Martin. I’m quite confident of this; I’ve been planning the wedding since Martin was born.

(“‘The engagement between them is of a peculiar kind. From their infancy, they have been intended for each other. It was the favourite wish of his mother, as well as hers. While in their cradles, we planned the union . . . .'” Jane Austen, Pride and Prejudice.)

Those far-off nuptials, however, are not the topic du jour. Instead, the day after I dropped my erstwhile roommate and her daughter off at the New Jersey ferry, I received a message through Facebook, which I reprint here, unedited other than the pseudonyms:

It was great seeing you, Adrian, and Martin yesterday.

I wanted to tell you something in the car and didn’t get a chance to. I remember you told me a while ago that Martin could not participate in a kiddie gym class because he was not able to follow what the other kids were doing and would go off and do his own thing. Well, yesterday, I noticed that that was not an issue for Martin anymore. Remember when we were having our jam session? I was on acoustic guitar, Mieko was on electric guitar, you were on tambourine, and Martin was on harmonica. He was definitely aware that we were all playing music together. Not only was he aware that we were having a jam session, but he also noticed a certain someone (Adrian) who was off doing his own thing and was not participating in the group activity! He then proceeded to pull over Adrian to the piano so that everyone was participating together!

What was impressive was that we weren’t all doing the same activity, like everyone hopping on one foot or everyone clapping hands. All of us were each doing something different with different instruments, and yet Martin recognized it as a coordinated activity where each person, doing something different, was together working toward the same goal of creating music. So playing the piano was acceptable to him, but looking at the computer screen was not. I am no expert on child development, but doesn’t that require an awareness of others at a level that three-year-olds don’t always have?

Anyway, the jam session was very fun and very cool!

I take issue with only one part of this message: With twin seven-year-old sons at home, plus Mieko, my roommate by now is an expert on child development. And that makes what she wrote all the better. 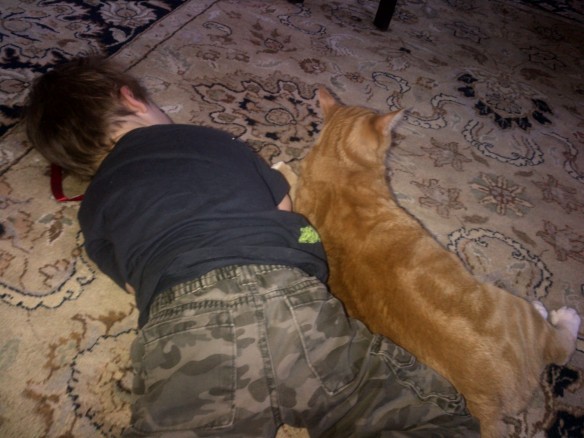 A boy and his cat. Martin and George, tuckered out from a hard day of playing with friends.

One thought on “Special Guest Author: My Law-School Roommate on Jammin’ With Martin”