In one online forum in which I participate, mothers like to end their posts with “TIA”: for example, “My daughter can’t stop itching her arms. Doesn’t seem to be a yeast rash. Her nose is running, too. Anyone else seeing something similar? Allergies? TIA.”

For my first several months in this particular forum, I thought TIA meant, “This is autism,” like in the movie Blood Diamond, how the characters said “TIA” to mean, “This is Africa.” My interpretation made sense, right? This is all autism we’re talking about. All these weird genetic, health, and behavior issues? This is autism. It was only when one mother ended a post by writing out “thanks in advance” did it occur to me what everyone really was abbreviating with TIA.

As you know, for eight months Martin has been on the GAPS diet. Moving from his already clean diet to GAPS was no big leap. I pulled the non-gluten grains (rice, buckwheat, millet, amaranth) and starchy vegetables (occasional sweet potato) he was eating, along with stray thickeners like arrowroot and tapioca. I made sure nuts were raw instead of roasted. I increased, a lot, the amount of bone broth he takes each day.

Overall, GAPS has been helping Martin. Based on bathroom activity, his digestion is chugging along better than ever. Dr. Natasha Campbell-McBride, the author of the GAPS diet, recommends that it be followed for at least two years. That has been my plan for Martin: two years GAPS, and then a gradual return to an organic diet free from gluten, casein, corn, soy, refined sugar, and additives.

Martin is a “mito kid.” He has mitochondrial processing disorder, which affects the way his cells process, store, and use energy. Mitochondria are energy-converting organelles that produce ATP, the chemical “energy currency” of cells. When the mitochondria can’t do their job correctly, the long-term effects are low muscle tone, lethargy, and floppiness. I don’t have a better word than floppiness, by which I refer to clumsiness, and the tendency to lean on whatever is at hand, to drag one shoulder along a wall while walking, to collapse to the ground, to sit with the legs in a W formation. We’ve had some luck treating mito issues with a combination of MitoSpectra and additional levocarnatine. Nevertheless, I think we could be doing more.

My first reaction, with any health issue, is to ask whether I can treat it through diet. I do believe that food offers solutions to most health problems we’ve brought on ourselves, and something found in nature is usually safer than something synthesized in a laboratory. For mitochondrial processing, electrons move through membrane along electron carriers, in a process that releases free energy. Where do those electrons come from? Carbohydrate food molecules, as they degrade to carbon dioxide. (If you happen to be science-minded, here’s a paper that describes the process in more detail than I can grasp.) The GAPS diet is designed to heal the gut, for any variety of gut-related ailments. The carbohydrates that it allows are specific, for example, the sugars found in fruits. But I have to keep Martin’s sugars in check, because of his yeast flares. Lately I’ve been wondering if he might not benefit from the addition of another carbohydrate. (Carbohydrates differ in their complexity. Not all have the same mito effects.) With Martin’s gut doing so well, I’m willing to risk a try at . . . quinoa.

Yes, that’s right. I am boldly straying from GAPS enough to offer Martin a quarter-cup of quinoa incorporated into his food. He still isn’t having any grains; technically, quinoa is not a grain but a seed within the goosefoot family. (Differing interpretations on the grain/seed divide—specifically, whether quinoa is a kind of kitniyot, and therefore similar to the forbidden grains—is why, as I understand it, Ashkenazi Jews were historically reluctant to accept quinoa as kosher for Passover while Sephardic Jews were not, a debate that may have been settled a year ago, when the Orthodox Union began certifying quinoa as kosher for Passover. Fascinating.) In any event, quinoa is certainly not GAPS-legal, and I’m going to try it anyway and see what happens with Martin’s mito processing. Last night, I put together a sort of quinoa tabouli, with parsley, lemon, and carrots. The quinoa was cooked in bone broth, of course. We’re not going hog-wild or anything. Tonight I am planning to make “imitaters,” which are like tater tots except with white beans, seeds, and quinoa instead of potatoes.

Every so often I try to step back and look at the world I’m occupying. Adding a quarter-cup of organic quinoa to my son’s diet is now something I classify as a “bold move.” What person have I become? What is this life? 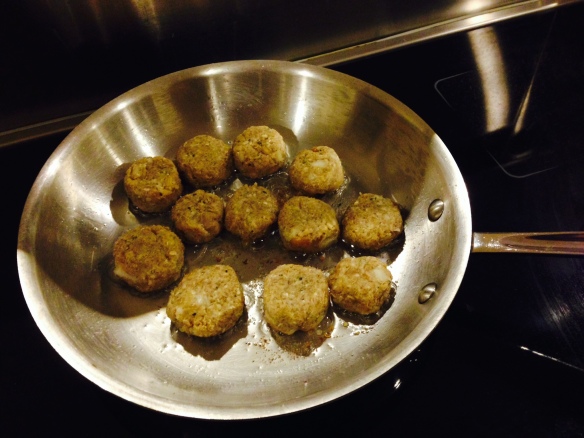 7 thoughts on “A Bold Move in the GAPS”