Sunday morning, I lay clothes upon Martin’s bed and told him to get dressed while I showered.

Ten minutes later, after my shower, I found Martin his room, fully dressed except for socks. “Hey, what about these?” I asked.

He grabbed the socks and scampered away.

“Wait!” I called after him.

He had left his dirty pajamas on the bed. He knows that dirty clothes belong in the blue laundry basket in his bathroom. I gathered the pajamas and stepped into the hallway. Martin was 15 feet down the hall, on the floor outside his bathroom, pulling on his socks.

“You left these dirty pajamas on the bed,” I said. I wanted him to get up, walk back to me, and take the pajamas.

Instead, he kept his butt on the hardwood floor, reached his hands toward me, and danced his fingers in the air. All the while, he kept his eyes on me.

Straight-up, flat-out nonverbal communication. No doubt about it.

Right away I remembered the day four years ago—before Martin could follow eye gaze or pointing, before a nick of the chin one direction or another meant anything to him—when Martin comprehended a nonverbal cue and dropped his napkin into my hand. We were a year post-diagnosis, then, and I was so pleased that he’d understood what I wanted.

Look at him now. Sitting there (literally) and motioning for me to throw him pajamas, as if it’s nothing. As if nonverbal communication is nothing at all. Sure, we may be five years into the arduous recovery, we may have our ups and downs, we may be clawing our way out of quicksand into fog, but look at him now.

I threw the pajamas at Martin. They hit him in the face. (Catching skills? Not quite there yet.) He giggled and still didn’t get off the floor. He kind of scooted and crawled into his bathroom, dragging the pajamas, and deposited them into the blue laundry basket, then returned to the task of pulling on socks. 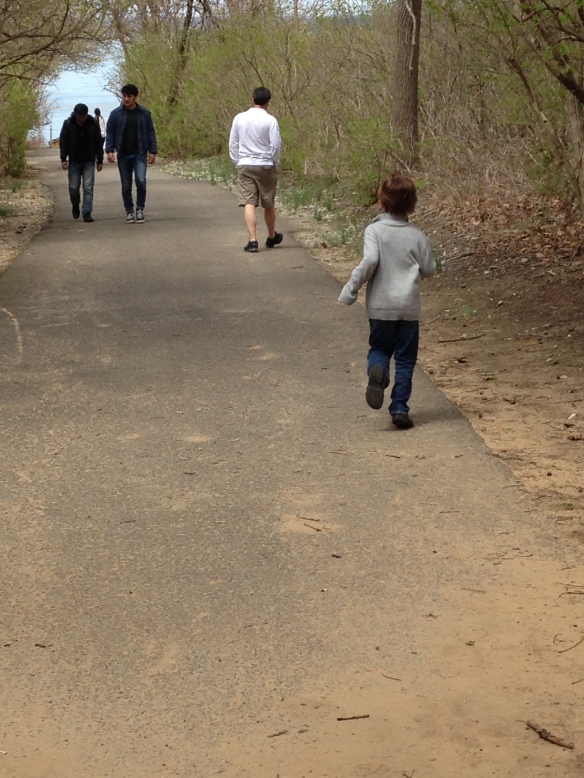 Martin behind Adrian, on a walk near our home. Learning, I suppose, to follow.

2 thoughts on “I See Your Napkin Hand-Off, and Raise You a Call for Pajamas”