When I found out I was pregnant, I began to dream about what my child and I would share.

Maybe he would learn to love what I love, and want to do what I do.

What I love is ice hockey, and what I do is watch the New York Rangers. I have a season subscription “mini-plan,” which entitles me and a companion to show up to approximately one-quarter of the Rangers’ home games, occupy two seats very near Henrik Lundqvist (first and third period), and whoop like a drunken sailor.

Martin has been doing so well lately that I decided that the time has arrived. On April 27, a Saturday, I brought Martin to Madison Square Garden to watch the Rangers play the New Jersey Devils. It seemed like the perfect starter experience: It was the last game of the regular season, it was a 3:00 pm matinee, and although the Rangers and Devils are usually a good rivalry, the Rangers had already made the play-offs and the Devils were already ruled out, leaving little at stake and perhaps a less-rowdy crowd.

Martin and I arrived by 2:00. I wanted to bring him in before the big crush of fans, and to acclimate him before the cheering.

The first thing he asked for was a bottle of water, which I bought him, totally forgetting that the Garden vendors take the bottle cap away and make the bottle a giant pain in the neck to carry without spilling.

Next we headed to a fan shop to buy Martin a new Rangers jersey. Martin was already wearing a blue toddler-sized #30 Henrik Lundqvist jersey, but that was too small because he’d owned it since—well, in any event, since he became old enough for me to swaddle him in a Henrik Lundqvist jersey, sometime around his birth. At the shop I displayed the available boy-sized jerseys. Martin’s choices were a classic navy-blue #61 Rick Nash (master of the goal-scoring universe), an away-game white #24 Ryan Callahan (Cap’n Cally! upstate power!), or a home-ice blue #30 Henrik Lundqvist (yes, Henrik Lundqvist). Martin waffled for ten minutes before settling on the #30 Lundqvist: a larger version of what he already was wearing. Outside the store, he refused to wear the new, larger jersey like I asked. Instead, he spilled half the capless bottle of water and cried because it made his pants wet.

Five minutes later we were in our seats. Both teams were skating around the rink, pre-game practicing. Immediately I realized that, when I attend games with other adults, I do not accurately perceive the level of noise and other stimulation inside the Garden. It is like a rock concert in there. Music blares, the announcer yells, fans scream, lights flash, sometimes the entire inner arena goes dark.

With Martin by my side, these usually exciting aspects became threatening. He sat cross-legged in his seat, motionless except for intermittently covering his ears. I lifted him to see over the fans standing in front of us. I showed him Rangers in their blue jerseys and Devils in their red jerseys, each team skating around its own half. I pointed out Lundqvist in goal, wearing #30 just like Martin.

Martin continued covering his ears, then wrapped his arms around my neck and squeezed.

We retreated to the concessions level. I purchased a Brooklyn Lager in a cup, with a straw, because I am cool, and sipped some while Martin gazed through floor-to-ceiling external windows. I suggested returning to our seats. He replied, “I don’t want to go back to our seats.” We waited a while longer.

I can’t say that Martin was enjoying himself. But he kept it together.

Near the end of the first period, Martin reached forward and took a water bottle from a drink holder, thinking it was his own. Instead, Martin’s bottle was one drink holder to the left, and the bottle he grabbed belonged to a boy about ten years old, in the seat next to Martin. That boy seized the bottle from Martin’s hands, forcefully. (I think he might have been wary of Martin because of the slouching and flopping.) I apologized to the boy and handed Martin the correct bottle, and I could see that being startled that way had pushed Martin toward his breaking point.

During first intermission I escorted Martin to the quietest area I could find and asked if he would like to go home. He said yes. I explained that if we left we would not be able to come back into the arena and asked whether, knowing that, he still wanted to go home. He said yes. And so we headed for the ground-floor exits, where I told a security guard, “My kid isn’t feeling well. We’re going to watch the rest of the game from home.”

In the subway, Martin had what I think was a delayed-reaction meltdown. He became fixated on dictating which passengers could get off at which stations, and threw a tantrum when, inevitably, the passengers got off at the stations of their own choosing. I took Martin on my lap, let him cry, and then successfully distracted him by asking him to name the stops between Madison Square Garden and our home.

If you are the parent of a neurotypical child, the afternoon I’ve just described might sound like a disaster. We saw only one period of hockey, and I had to abandon more than half a beer, its forlorn straw sprouting toward nowhere.

To me, it was no disaster. It was a darn good start:

•      Martin must have been overwhelmed by the noise, lights, and crowds. I can hardly imagine an environment with more external stimuli. Nevertheless, he held it together. He did not freak out.

•      Martin returned with me to the seats even when he didn’t want to. I didn’t have to force him or bargain. He acceded to my wishes.

•      With all that was going on, I wasn’t sure Martin would really comprehend what was happening around him. But he did. Ten minutes into the game, he had turned to me, in all the hubbub, and said, “Mommy, it’s just like when we watch hockey on television.” Ah-ha! We were experiencing hockey together!

This season, one period. Next season, two?

As Martin continues to recover, we will encounter more that he can share. Actually share, as in emotions exchanged. Adrian will take him to the opera. My brother Eddie will teach him to play backgammon. My stepfather will show him how to swing a golf club. My mother-in-law will make him sweat through Bikram Yoga.

The Rangers game was no unmitigated success.

Still, there was a time, not long after Martin’s diagnosis, when I wondered whether I would ever be able to take him to a restaurant in peace again.

I just took him to Madison Square Garden. Unassisted. If I were given to writing profanity, I would drop an F-bomb between Square and Garden, for emphasis, because that’s the kind of big deal I’m talking about. 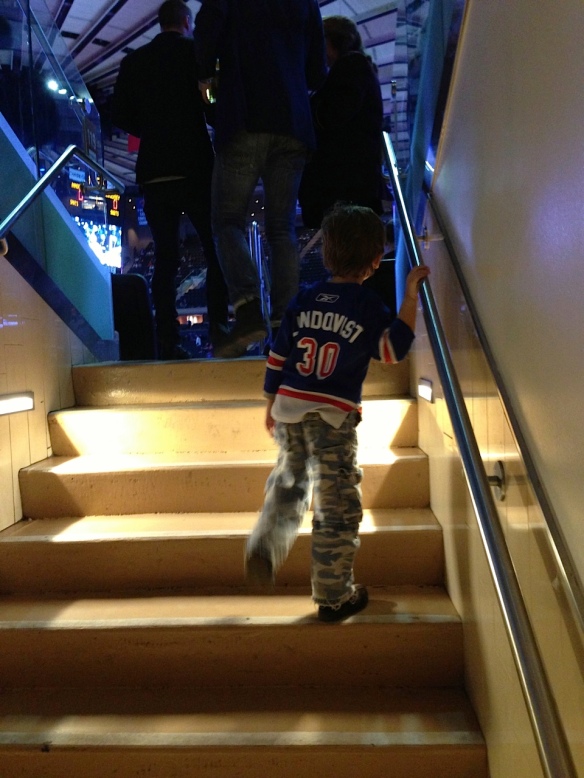 OMGosh! Is that Henrik Lundqvist? No, wait. It’s my Martin, checking out the Garden.