Last year, Martin was into Adele. Adrian managed to snag three tickets to one of Adele’s September shows at Madison Square Garden. That’s the good news. As for the bad news—the show was on a Sunday night, in Manhattan, in September, when Martin was adjusting to a new school.

The concert was magical. We went by train, had a tapas meal, arrived at the Garden in time to explore before the show. Martin had been anxious about whether the music would be too loud, so I had a packet of ear plugs in my purse. We need not have worried. From the moment the lights dimmed and Adele rose upon a platform stage, singing “Hello,” Martin was transfixed. He never covered his ears. He wasn’t bored or asking to leave. He was so into the show that he tried to convince me he didn’t need to go to the bathroom, even as he was plainly kicking his feet and shuffling because he had to pee.

I forced him to go to the bathroom with Adrian. Apparently, before Adrian was done using the bathroom, Martin announced his intent to return to our seats—and Adrian let him go. My husband set Martin loose alone in Madison Square Garden and expected him to find his way back to our seats. Martin, miraculously, managed to do so, or at least to find the correct door, where he was stopped by a security guard who told him to wait for his father. If only my husband could have the judgment of a concert security guard.

It was after midnight by the time we got Martin home and in bed. While Adrian and I agreed the concert had been a resounding success, the excitement and abbreviated Sunday sleep time (like, four or five hours less than usual!) did not do his week well: Tomorrow’s blog post, which I’ve already written, is titled, “Week Four. Disaster?”

I’ll close with a few tidbits.

First, I’d hoped to hide, from Martin’s teacher and aide, why he was so tired. I mean—what kind of parents drag their special-needs eight-year-old to the City for a concert on a school night? Back in the old days, I could have hidden the deed. No more. Monday afternoon Martin’s aide left a note in his backpack, saying everyone enjoyed hearing all about the Adele show from Martin.

Second, if you’re in the mood to read, jump back to the post titled “Madison Square [Explicative] Garden” and remember the last time I tried taking Martin to a loud, noisy event in the World’s Most Famous Arena. 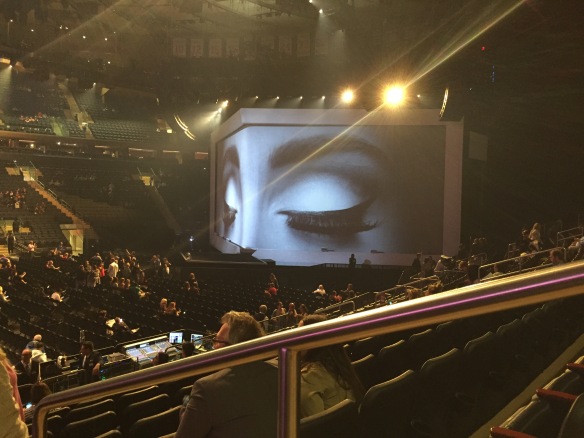