Most email traffic that passes through FindingMyKid@yahoo.com congratulates the progress we’ve made with Martin. Some correspondents compliment me (thanks!) for presenting the difficult aspects of recovery, too, instead of pretending every moment is roses and wine. A few parents bemoan their own children’s lack of progress.

I want to speak to the parents who feel like they aren’t making progress. To be honest, despite the progress we’ve made, wine and roses are far, far, far from our everyday reality.  That’s not to say that recovery isn’t the series of joyous breakthroughs I present in this blog. It is rather to admit that these developments punctuate long stretches of “no change” or even apparent regression, which I prefer to call “the reappearance of former symptoms.”

My last couple posts referred to the bad week Martin’s been having. Let’s add some more depth and talk about yesterday morning—

I knew the morning would be tough, because Martin took almost two hours to fall asleep the night before and was bound to be tired. At 5:55 a.m., as usual, I carried Martin from his room to our bed, to wake up with Adrian.

Around 6:35 a.m., as I was putting the final touches on breakfast, I heard yelling, whining, and a scream or two, all from Martin. I found Adrian trying to get Martin dressed. Martin was in a fetal position, refusing to cooperate. He said, “No! I want to stay here today! I don’t want to go to school.” Then, frustrated, he switched to the nonsensical: “I don’t want you! I’m going to sleep at school! I don’t want to come home!”

Adrian waved off my offer to assist. I returned to the kitchen. Ten minutes later, the crying and complaining uninterrupted, Adrian and Martin appeared in the kitchen. Martin was dressed, save for the “crazy socks” he was supposed to wear for Dr. Seuss appreciation week at school. His whine had become, “I don’t want to wear crazy socks. No! No! No! I don’t want breakfast.”

We got him seated at the table. Although he has a chair with footrest that facilitates using his legs and core to sit up straight, Martin slouched. When he saw his breakfast (turkey bacon and vegetables, pretty standard), he lowered his voice to the continuous, slurred word-melding that I detest. “No food oh Mommy oh Mommy oh Mommy Mommy Mommy no no no.” He thrust his fists into his stomach and curved his back, a posture that (I think) indicates stomach pain. When I tried to offer him turkey bacon, he batted my hand and screamed, “Noooooo!” He grabbed his glass of “kombucha with seeds,” pursed his lips on the stainless-steel straw, and changed his whine to, “Drink, only drink no anything else oh Mommy.”

Adrian passed back through the kitchen, kissed us both, wished me good luck, and left for work.

I switched on the kitchen television. Sesame Street. Martin’s a bit beyond that now. Still, I thought the distraction might help. Over the next half hour I managed to get his supplements and most of the bacon (none of the vegetables) into his mouth. In the meantime, he left his chair to bounce up and down, slapped at me, used his fingernail to scratch marks in the wooden tabletop, whined incessantly, dumped fish oil on his school sweater, told me to turn off Sesame Street, cried when I turned off Sesame Street, spilled his drink while refusing to take his mouth off the straw, curled himself into a ball around his Curious George sock puppet and wouldn’t release, threw vitamins on the floor, and ultimately dissolved into a tantrum because he had no time to play before the school bus came.

By sheer force of love, willpower, and coffee, I kept my patience and got him on the bus. (“Martin’s not feeling his best this morning,” I told the matron when I handed him over.) Then I returned to the kitchen to sulk.

That’s right, I sulked. Because when you are working hard to recover your child, a bad morning (bad day, bad week, bad month, bad season) leaves you wallowing in a stew of doubts.

•            What am I doing to my child? Is this worth it? What caused this meltdown? I think the culprit yesterday morning was probably the nystatin we started last week. I think. But really, who the heck knows? And why would it matter? If something—anything—I’ve done has caused Martin to feel like he did yesterday, am I really acting in his best interest?

•            Why have I given up so much to follow to pursue autism recovery? I used to have a career, disposable income, and free time. Now my job is “autism recovery specialist,” our money goes to therapies and supplements, and getting out for an evening requires hours of preparation. Even worse, I’ve met families who claim their children have improved markedly with nothing but traditional therapies like ABA and speech therapy. Why go on?

•            By working toward recovery, by rejecting the idea that Martin is bound to autism for life, am I making each day harder, for all of us? Long ago I wrote a post titled “Failure to Grieve.” To this day, I wonder whether Adrian and I would breathe easier if we just decided, Martin has autism. Let’s help him live with it as best he can.

•            Other than families in the recovery community, almost everyone I know is a subtle naysayer. I never realized exactly how many ways there are to express skepticism: “Is Martin’s doctor a real M.D.?” “Do you have a regular pediatrician supervising all this, too?” “Is that actually a scientifically accepted principle?” “You’re not going to start saying kids shouldn’t get vaccinated, are you?” “Where did you hear about that?” “Have you tried taking all those supplements yourself?” “Poor Martin! What a shame that he can’t eat like other kids.” And those are comments from people who say they support what we are undertaking. When Martin is doing nothing but spitting venom and whining nonsensically, I think, You know, I really do like fitting in with other people. I think I’ll get off the whacky autism recovery path and go back to the mainstream.

So I sulked. I finished my coffee, and I climbed back in bed for an hour.

Then I rose again, made myself a protein shake, and went to CrossFit. Nothing clears my head quite like loud music and exercising to exhaustion. The truth is that mornings like yesterday are so remarkable only because Martin is getting better. With perspective, I remember the early days when we never knew what Martin was going to do next, and he lacked the language to convey his needs. He used to bolt if I wasn’t holding his hand. He used to cry inconsolably if he wanted to take the 2 subway but the 3 came instead. With perspective, I also reckon that, no matter what the ABA-enthusiasts say, no magic autism faerie is ever going to wave her wand and make Martin better without medical intervention. Recovering Martin’s health and opening him up to full participation in our world of opportunity—that’s up to me. It’s going to happen through my perseverance, or it’s not going to happen at all.

Back to wine and roses: To be even more honest, and less metaphorical, the recovery process has increased my dinnertime wine consumption, Adrian is a thoughtful husband who sends me flowers, and indeed most weeks I buy roses or tulips for our kitchen table vase. The path to recovery is hard. Wine and roses may not be everything, but they sure do help get past the stumbles. 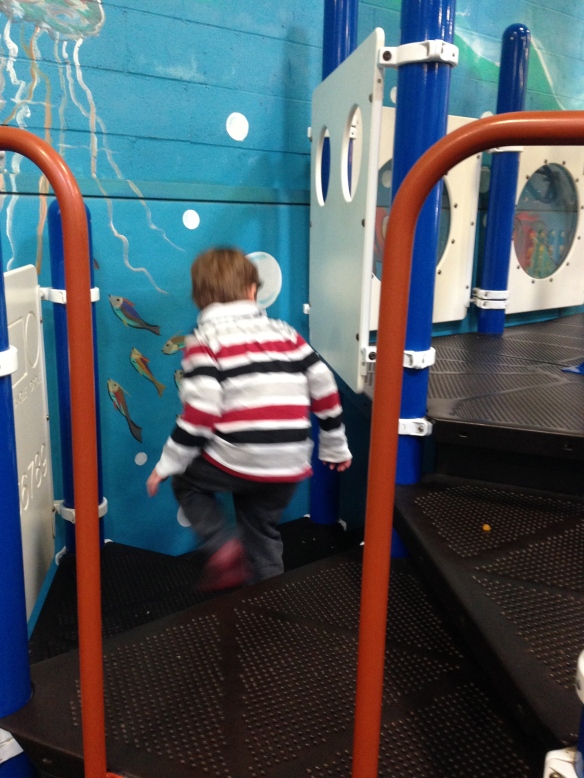 For better or for worse, he’s my guy.