At 8:30 Sunday morning, Martin was having a mini-meltdown. He danced awkwardly through the kitchen and family room, yelling, “No alterations! No, never! Mommy, is Daddy right? Can he make alterations? No, it’s thee scoops!”

The morning tantrum was prompted by sorbet. We planned to eat dinner at a restaurant Sunday evening. Nine hours before the event, Martin was already fixated on getting three scoops of sorbet. A sorbet order, he claimed, is three scoops. Last visit to the restaurant Adrian had “altered” the order and asked for Martin to receive just one. When Martin, at Sunday breakfast, demanded to know whether Adrian planned to alter that evening’s order, Adrian replied that Martin could ask for half-scoops of two different flavors, but it was better if he ate only one scoop total. And then Martin freaked.

Martin has two obsessions these days: food and iPad.

The food obsession worries me more, because (1) as opposed to an iPad fixation, food fixation is less common; and (2) its cause, at least in part, is the diet we follow for recovery. Martin is allergic to dairy and to red meat. He hasn’t had gluten in more than seven years. We avoid soy. Other than those restrictions, I currently let just about everything else slide when we are dining out, within reason. Martin is now wise enough to pin me down on these restrictions: “I can have anything but dairy and gluten, right?” “How much sugar can I have?” “Does gluten-free pasta have sugar? How much?” “Are French fries a treat?” He’s developed a give-me-an-inch-and-I-will-take-a-light-year approach to pushing boundaries. I made the mistake, last year, in an effort to harmonize a Sunday dinner, of allowing Martin to order a dish of sorbet for dessert. Martin immediately placed sorbet into his foods-I-can-eat column and fixated on whether sorbet is a “treat,” i.e., something he gets only in limited quantities versus something he can eat whenever. Fast forward to today: Within five minutes of awakening, routinely, he’s asking about whether and when he will get sorbet that day, the first of may food questions.

I overcompensate. I reason that the less Martin feels left out, the less he will fixate. The freezer in the school nurse’s office is stocked with GFCF cupcakes, donuts, and ice cream, in case of classroom party or event. Every Tuesday afternoon Martin shows up to church with a snack more desirable than the pretzels and cookies the others receive. I always keep supplies to conjure a GFCF pizza, on a moment’s notice. Sunday evening, at the restaurant, Adrian ordered key lime pie for dessert. (Adrian and I allow ourselves dessert only if Martin has an equally appealing option. He had his sorbet.) “What’s that? Can I eat that? Does it have gluten or dairy?” Martin asked, when the pie arrived. I replied, “That’s called key lime pie. This one has dairy, but would you like to try key lime pie that you can eat?” He said yes. I promptly rearranged my Monday afternoon schedule so that I could take two hours to prepare GFCF key lime pie. The policy letter I was engaged to write for work would have to wait. Like I said, I overcompensate.

Then there’s the iPad. Weekdays, Martin gets 30 minutes of iPad time, after homework is complete, and dammit, he’s going to make sure he gets that time. Weekends are tougher still. I try to limit the iPad to 60 minutes, but that means occupying him the remaining 12 hours he’s awake. Yes, of course I know that I’m supposed to let him be bored so that he’ll find creative ways to occupy himself. Thus far, however, the only way he’s found to occupy himself is to beg for the iPad and stage a tantrum if his wish goes unfulfilled.

I admire parents who draw the line and curb obsessive behavior by getting rid of the iPad altogether. I’m unwilling to follow their example, for two reasons. First, admittedly, I fear the weeks of meltdown and the impact on my life, which already lacks enough hours to accomplish my goals. There could be no trial period in an action like iPad removal; if we said we were getting the rid of the iPad but eventually relented and returned the device, Martin would never respect a parental decision again. Second, paradoxically, screen time is one way that Martin is able to connect to other kids. He’s made a couple school friends through Minecraft, and other games like Subway Surfers give him ready conversation topics when he finds a fellow player. He also uses the iPad to send messages to his cousin and to his uncle. I’ve decided I am okay with him having the device, with time limits. I do wish the iPad weren’t always on his mind whenever it’s not in his hands.

Martin got his three scoops of sorbet, Sunday evening. While Martin was visiting the bathroom, Adrian asked our server please to tell Martin that an order of sorbet comprises one scoop only. The server did that. Then he added: “And you, young man, may have as many orders as you’d like!” At that point, our dilemma was three scoops sorbet, or an in-restaurant meltdown (which would have been highly unusual, but Martin was having one heckuva bad day). We went with three scoops.

Then Martin accidentally broke a glass, and melted down anyway. 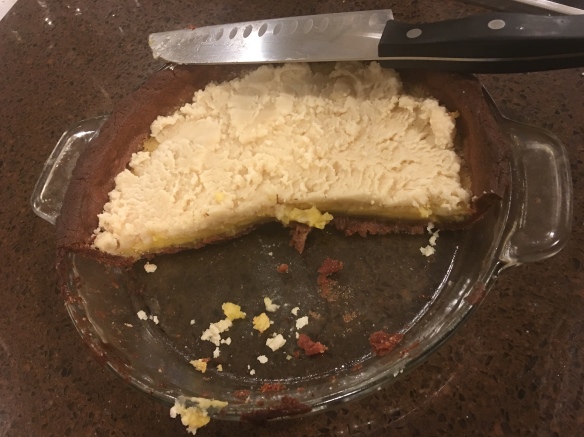 The Remains of the D…essert. The recipe called for coconut cream, which I didn’t have. I substituted coconut butter, and the topping came out less smooth and more chunky. Nevertheless, my GFCF key lime pie was a hit.

Friends visited us recently with their son Robert, who is younger than Martin and less far along the autism recovery journey. Robert kept his mother busy, as she had to pull him repeatedly away from his fixations—trains, colors—to get him to eat or otherwise join the group.

After our guests left, Adrian said, “Robert can be a handful!”

I replied, “Reminds me of Martin a few years ago.”

“I remember when we always had to take the Brooklyn Bridge home, and how he liked certain train lines, but he wasn’t so challenging as Robert.”

“Are you talking about our son, Martin?”

“So you’ve forgotten when I had to buy placemats in different colors so he could practice using something other than yellow without having a meltdown?”

“That’s right. I did forget that.”

“And the panic if he boarded a subway and no yellow seat was available?”

“Then there were the times when he and I had to wait for the No. 2 subway, because if a No. 3 came instead, he’d scream with fright, even though he knew it went to exactly the same place.”

“You did used to tell me about that.”

“How about when he couldn’t go to school unless he had that pink stuffed bear from Chicago in his backpack? When he had to approach and open every mailbox we passed on City streets? When he refused to enter the wine bar if ‘our table’ was occupied? When he—”

“Okay, fine. He did have all those obsessions. It’s easy to forget what those days were like.”

This conversation made me reconsider the previous posts “So Far Gone” and “Manifesto.” One day, when someone says, “Maybe Martin never had autism,” will I respond, “Maybe not,” because I too have forgotten? How will we bear witness to recovery as more and more symptoms become so far gone that we forget they ever existed?

I have his earliest developmental neurology reports, the ones that describe a child unresponsive to his own parents, unaware of his own name, echolalic, in the first and third percentile of expressive and receptive language. Those tell the early story.

And I have this blog.