Martin’s new thing is to request “a little chat” before he goes to sleep. “Mommy, can we have our little chat? Then can you send Daddy in for a little chat?” Participating in the little chat requires me to climb into bed and lie next to him as he answers questions about his day, talks about what’s to come, and then requests a nighttime assurance of how much I love him. “Do you see the ceiling fan, how it spins?” I say, or something similar. “Imagine how many times it would spin in a million years. Put that number with every drop of water in the Pacific ocean. You can add in the Atlantic and the Indian oceans, too. Those spiders in the jungle? All the spiders in all the jungles, and all the legs on all the spiders and all the tiny hairs on all the spiders’ legs. Add that all together, and still I love you more.”

Since we are living abroad, one topic we discuss frequently, both in our nighttime chats and otherwise, is geography and geopolitical concerns. Martin has memorized the seven nations of Central America by size, both area and population, along with their capitals and order from the Mexican border to the Columbian. He asked if we could make an excursion to Honduras, and I said no because I consider Honduras too dangerous. This got him interested in “dangerous countries.” I tried to explain other nations where I would not travel at this time, and why: South Sudan because of civil war, for example, or Syria because of domestic conflict, Venezuela because of mistaken government policies and newfound resource scarcity, North Korea because of an oppressive regime.

I wasn’t too surprised, therefore, when Martin began one night’s little chat by asking, “Do you know something funny about North Korea?” and then informed me that “a kid at camp” had told him a story about North Korea. I was instantly suspicious. Martin likes to make things up and claim he heard them from someone. Which kid? I asked. A new girl who’s older than he is and whose name he doesn’t know, he replied. Hmmmm. Okay. What was the story?

As Martin rambled, relaying the tale the nameless older girl had given him, I realized that this wasn’t made up at all. He was giving me the basics of the fate of Otto Warmbier, the University of Virginia student arrested January 2016 in North Korea for allegedly stealing a political poster from a restricted floor in his hotel. Plainly, Martin actually had been told this story, and accurately was repeating to me what he’d been told.

Martin concluded by asking me whether this North Korean tale really had happened.

I’ve never before witnessed this level of engagement from Martin. It hasn’t been so long since I was overjoyed when Martin became able to tell me whether his sneakers were at school. This North Korea discussion was so far beyond answering basic questions. Martin must have been talking to this girl at camp, listening to what she said, and comprehending the information. He retained the story basics and sought confirmation at home. He initiated the conversation with me.

I didn’t bother correcting any details, like whether we know punches to the head caused Warmbier’s death, or that he was detained 18 months instead of two years. I said, “That terrible story is true. Those things happened to a young American man who was visiting North Korea.”

“What was his name?” Martin asked.

“Otto Warmbier. He was a student at the University of Virginia.”

“I can’t remember. It must have been a couple months ago now.”

“I think he died the first week I had camp.”

I could see Martin becoming anxious, so I said, “It is very sad. North Korea is a dangerous place. But do you know what? Nicaragua is not. You are safe here in your bed. Abuela is sleeping in the same room, and who else is in the house? Samara is here, and I am here, and Daddy is here. And who’s outside? Señor Pedro is outside. You are safe.”

Señor Pedro is our house’s cuidador (the caretaker or nighttime guard), who has a room in the garden. Martin loves Señor Pedro.

Once Martin was reassured and asleep, I went on-line to check when Otto Warmbier died. June 19. Martin started camp Monday, July 17, so no. He was off by a month. I don’t know whether the girl at camp told him Warmbier had died the first week of camp, or whether somewhere in the background of his extraordinary memory was a snippet of news he’d heard/seen and mistaken the date.

But I do know this: I am a closer than ever to knowing how it feels to converse typically with my son.

We were hanging out with two other families at a local resort. The adults ate and talked while Martin and their sons played in the swimming pools. The two other boys, Feña and Laszlo, were five and six years old, younger than Martin (and consequently, appropriate playmates).

While the three boys were zipping down a waterslide, swimming out of the pool, and running back to the top, Martin fell behind. His eyes popped above water at the bottom of the slide only to see his friends already exiting the pool. Martin hurried to the stairs, climbed out, and yelled, “Feña! Laszlo! Wait for me!”, then chased after them.

Feña! Laszlo! Wait for me! It was the most natural thing in the world.

But for Martin, of course, it wasn’t. For Martin, the moment represented an extraordinary degree of social engagement. He was playing with other (younger, but typically developing) boys, he wanted to be included, and when he felt excluded, instead of disengaging or growing frustrated, he employed the correct tools to attempt to reengage. I cannot recall ever having seen this total package. 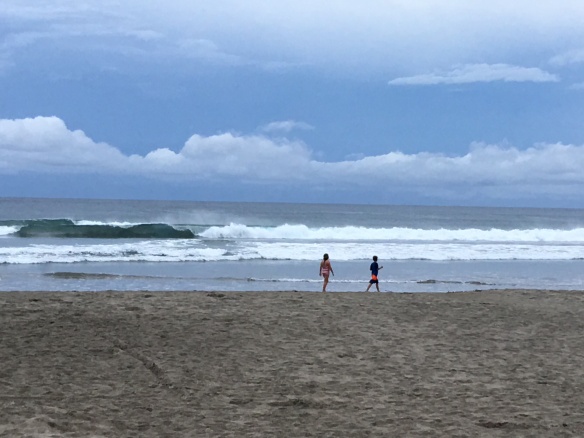 Martin on the beach with his cousin Mandy, who came to Nicaragua for a week’s visit.

My good friend Stacey has been texting me, asking how Nicaragua is affecting Martin. Is he doing better? I don’t always answer right away, because as always the right answer is complicated. As I wrote on this blog, Martin’s anxiety decreased during our first weeks in Nicaragua. Then it rebounded, perhaps in response to some bullying incidents at his day camp. (Spiteful kids, some of them, are everywhere, it turns out. “Spiteful” is the kindest word I use.) Now the anxiety level has fallen again. Martin still thrusts his jaw forward, which I usually take for adrenal stress, but I haven’t seen any clenched fists, and we haven’t endured a meltdown for weeks. His conversation skills have improved. He still repeats himself, and he has trouble following the gist in order to insert himself properly into group discussion. One-on-one, by contrast, he is sensational. I’d go so far as to call him “chatty.”

So I’ve had a sense of improvement. Until this week, however, I did not realize the extent of the improvement. This week Adrian returned to Nicaragua, after more than five weeks’ absence.

“This is a different kid,” Adrian said.

Then, just last night, unsolicited, I received this message from one of Martin’s camp directors: “I feel like this summer is the start of something great for Martin. The next stage.”

I’m won over. I’m prepared to say that living in Nicaragua this summer has made a difference—even a big difference.

By the way, Feña and Laszlo didn’t wait for Martin. In their little-boy exuberance, they kept running when Martin called to them.

Feeding Martin in Nicaragua is both more and less challenging than in the States.

To be sure, Nicaraguans love their packaged foods. Chips, crackers, cereals. Breads. Whatever forms of snacks.

They also love their fresh food. Fruits, vegetables. Fish and shrimp and octopi pulled from the ocean and eaten the same day. (I hate that Martin eats octopi.) By now we’ve been able to locate the stands and trucks with the produce we want. Samara has a favorite fish monger and a carnecería for occasional chicken. Virtually nothing is organic, except some newfangled greens and the occasional imported quinoa. I am comforted by the fact that the food is grown locally, where Nicaragua’s stricter stance (than the U.S.) on genetically modified crops also reduces the presence of especially worrisome contaminants like glyphosate.

Martin’s breakfast is usually grain-free pancakes (say, plantains and peanut butter), or fritters, or eggs with vegetables, plus fruit. Dinner is rice and beans, or coconut-crusted chicken nuggets with vegetables, or quinoa pilaf, or peanut-butter stir-fry, or maybe ceviche. (Samara’s ceviche skills are said to be outstanding.)

A Nicaraguan breakfast of plantain-and-peanut-butter fritters plus apple. Did you know apples can be grown in Central America? Neither did I.

Weekdays, Martin eats lunch at his camp. That development—eating with the other kids, and mostly what they eat—has been huge for Martin, who’s wanted all year to buy lunch at his school back home, which, of course, would be inconceivable: Have you seen U.S. school lunches? Here, at the camp, lunches are prepared fresh from organic ingredients, many grown on site, with focus on health. I met in advance with one of the camp directors and asked that they respect Martin’s dairy and beef allergies, and that he not be permitted to eat any gluten. No problem, they said. The directors reported that, for the first week, Martin had “lunch worries” and needed to be persuaded each day, anew, that in fact he would be fed. At first, he ate tentatively, mostly Nicaragua’s famous rice-and-beans dish, gallo pinto, or even arroz unadorned.

The aftermath of Martin’s octopus, rice, and vegetables on the beach.

After the tentative first steps, Martin started taking advantage of everything offered. I mean, everything!, and that’s brought some slip-ups. Even though I pack healthy snacks, he wants the snacks the camp keeps on hand for all kids, which include popcorn, commercial yucca and plantain chips (fried in who knows what sort of refined vegetable oil), French fries, popsicles with food colorings and refined sugar. I don’t like the snacks aspect but am resisting the urge to make the camp pull back; eating at camp, plus the wide availability of fresh seafood and vegetables in Nicaraguan restaurants (not much pizza or pasta getting in the way), seems to be helping to reduce Martin’s food-related anxiety. I hear less, “Can I eat this? Can I eat that?” and more, “Hey, do they have octopus? How about rice?”

We are, however, in something of a popsicle crisis. Now that Martin has tasted a frozen refined-sugar stick, my homemade frozen-fruit popsicles just aren’t cutting it anymore.

This is a “fancy” breakfast, like we have when guests are eating with us: pancakes and potatoes cooked with shredded vegetables.

The overall picture is that Martin has been eating 93.6% well, and 6.4% sugar and junk food. When I say sugar, I mean those aforementioned popsicles but also potatoes, rice (which also brings arsenic), and fruit. The fruit includes a daily smoothie from our favorite smoothie stand. Martin selects the three fruits he wants (usually pineapple, mango, and lemon), while from behind him I mouth “¡y aguacate!” to the smoothie-maker so that he’ll throw in some avocado, too. Martin professes not to like avocado, so I have to get creative, like sneaking it into a smoothie.

A few weeks ago, I discussed the situation with Martin’s doctor back home. Too much sugar, I confessed. A whole lot of fruit. Smoothies every day.

“Some of it directly from the fields,” I replied. 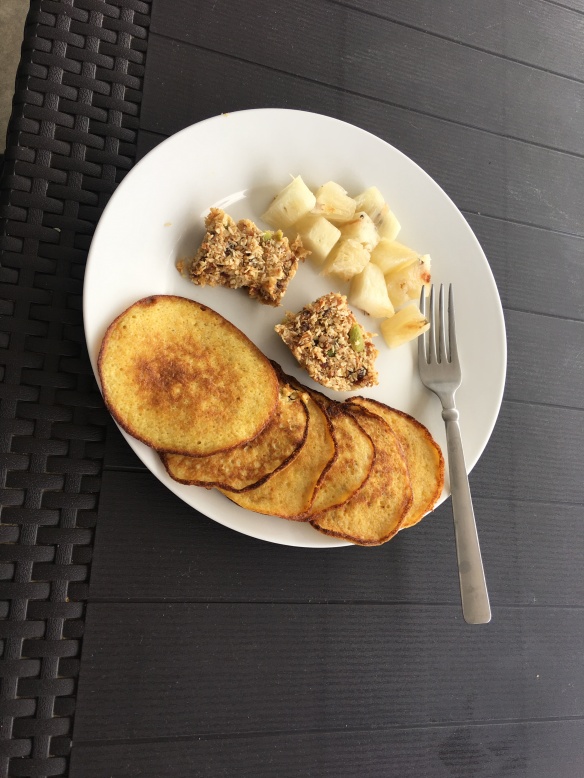 Another breakfast, this time plantain-and-egg pancakes with pineapple and raw energy bars that I made from almonds, dates, limes, and shredded coconut.