At the music school again. I’m in the waiting area, with my laptop and four other adults, while Martin takes his piano lesson. A woman enters, accompanied by a teenager and a younger boy, maybe eight or nine years old. All three look alike; I assume these are a mother and her two sons. The mother approaches the front desk with questions about lessons and fees. As she talks to an employee, for a while, she turns her back to everyone else.

Immediately I see that her younger son is on the spectrum. He’s holding a small electronic device, a video game, close to his face as he paces urgent, long-stride circles, humming. He plops to the ground and focuses intensely on the video game, tapping the screen with his thumbs. He rises and recommences circling.

The teenage son, meanwhile, settles into a sofa and starts studying some sheet music. He appears comfortable with the situation, and not embarrassed by his brother. In fact, the teenager looks as if he could be a special-education professional. Magically, his eyes are on both his sheet music and his ASD brother. When the younger boy breaks his circle pattern and bolts down a hallway, the teenager follows him. They return seconds later, the teenager guiding and redirecting to the video game. When the ASD boy intensifies his pacing, then begins to disrupt objects in a sensory-seeking manner, the teenager calmly collects him in his arms and brings him to the sofa, cradling him in all-over pressure. Not once does the mother even have to divert her attention from the employee with whom she’s talking—although she, like any special-needs mom, must sense all that’s transpiring behind her.

After five minutes, the mom settles her business with the front desk, and the teenager’s music lesson is ready to begin. Before he heads off with the instructor, the teenager makes eye contact with his mother, so she knows he’s passing his younger brother’s safety to her.

It’s like watching a master-class in family ASD management.

Two men enter. They look cool. Super-cool. Sunglasses. Ample, sculpted chests, pecs, and biceps, visible under fitted polo shirts. Nice jeans and shoes. Okay, I’ll say it. They’re handsome. They have four or five children with them. I’m not really sure how many, because my attention goes directly to the one with autism. From his face, I’d say he’s ten or eleven years old, but he’s almost adult-sized. He’s tall and, like many ASD kids, with their gut problems and food issues, he’s overweight. He’s not looking at anyone, or speaking. The other children store their sneakers in the plastic cabinets set up for that purpose. The ASD boy tugs off his sneakers and leaves them on the floor. The kids disappear into the climbing structure.

The taller of the two men, in a white shirt, seems to be the one in charge of the ASD boy. I guess that he’s the boy’s dad. Almost without a pause he scoops the abandoned sneakers and tucks them in a plastic cabinet. The two men take adjacent chairs and begin talking. They seem like good friends. I’m too far away to hear what they’re discussing.

After some time the ASD boy emerges from the jungle gym. He seems confused until he spots the two men, then runs to them and climbs onto his dad’s lap. The boy is so big that he looks absurd perched on a lap, like a teenager or even a small man curling his body onto another’s. His dad, Mr. Super-Cool, Mr. If-We-Were-in-Any-Other-Setting-I-Would-Take-Him-for-a-Childless-Playboy, continues talking to his friend while wrapping one arm around his son and using the other hand to rub the boy’s scalp. He betrays no hint of feeling awkward about the 150 pounds of kid smooshing his quads. He continues rubbing his son’s head until the boy springs to his feet and scampers back to the jungle gym.

The super-cool guys and their charges leave before we do. (My brothers and I, in tandem, are lazy caregivers. While Martin plays, for more than two hours, we’re sipping coffee and teasing each other, destitute of other ideas for filling a holiday afternoon.) As the other kids get themselves ready, Mr. Super-Cool puts shoes on his son’s feet and ties them. They’re nearer us now, and I hear him ask, “You okay, buddy?” Then, probably because his son is not verbal, he answers for the boy: “You’re okay.” They walk out holding hands.

There is a beauty to scenes like this, to a teenage brother forced to mature into vigilance, to a dude with nothing but tenderness for the child who requires more attention than the rest combined. I want to wave my arms and shout, “Hey, us, too! Autism’s got us, too! I’m proud to be like you!” I want to be counted with those who rise so brilliantly to the challenges they face.

Yet I also regret these scenes. Autism is a monster of our own making. Its incidence is rising from some combination (I don’t know which; who does?) of the dangers we humans have unleashed. Chemical concoctions disguised as food. GMO’s. Antibiotics, overused. Electromagnetic fields. Mercury and other heavy metals. Radio waves. Injected toxins. Pollutants. Pesticides. Sure, I admire the caregivers who meet autism head-on. They’re making positive choices. Where is the choice for the children with autism, who need calming, who crave sensory stimulation, who cannot sleep, cannot relate, cannot adapt, cannot ensure their own safety?

And where will they be when the brave and patient caregivers are no longer available?

We’ve got to stop this. 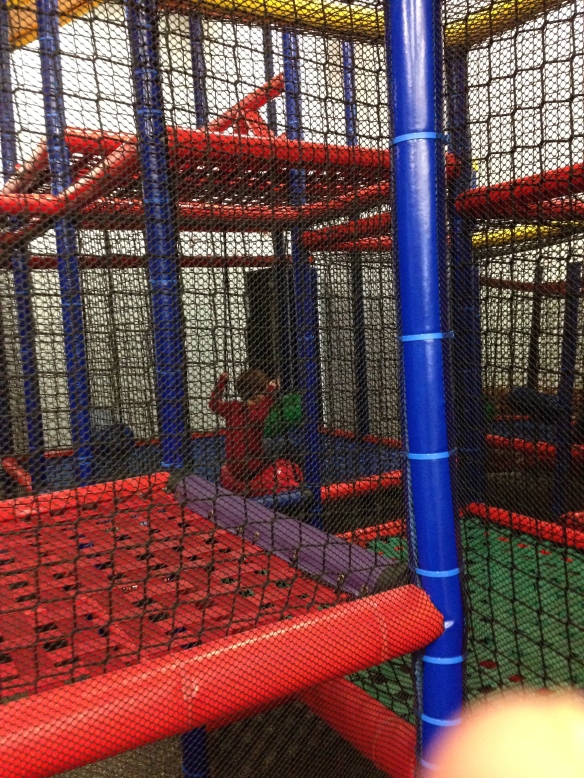 Martin, in the indoor playground, somewhere.