Feeding Martin in Nicaragua is both more and less challenging than in the States.

To be sure, Nicaraguans love their packaged foods. Chips, crackers, cereals. Breads. Whatever forms of snacks.

They also love their fresh food. Fruits, vegetables. Fish and shrimp and octopi pulled from the ocean and eaten the same day. (I hate that Martin eats octopi.) By now we’ve been able to locate the stands and trucks with the produce we want. Samara has a favorite fish monger and a carnecería for occasional chicken. Virtually nothing is organic, except some newfangled greens and the occasional imported quinoa. I am comforted by the fact that the food is grown locally, where Nicaragua’s stricter stance (than the U.S.) on genetically modified crops also reduces the presence of especially worrisome contaminants like glyphosate.

Martin’s breakfast is usually grain-free pancakes (say, plantains and peanut butter), or fritters, or eggs with vegetables, plus fruit. Dinner is rice and beans, or coconut-crusted chicken nuggets with vegetables, or quinoa pilaf, or peanut-butter stir-fry, or maybe ceviche. (Samara’s ceviche skills are said to be outstanding.) 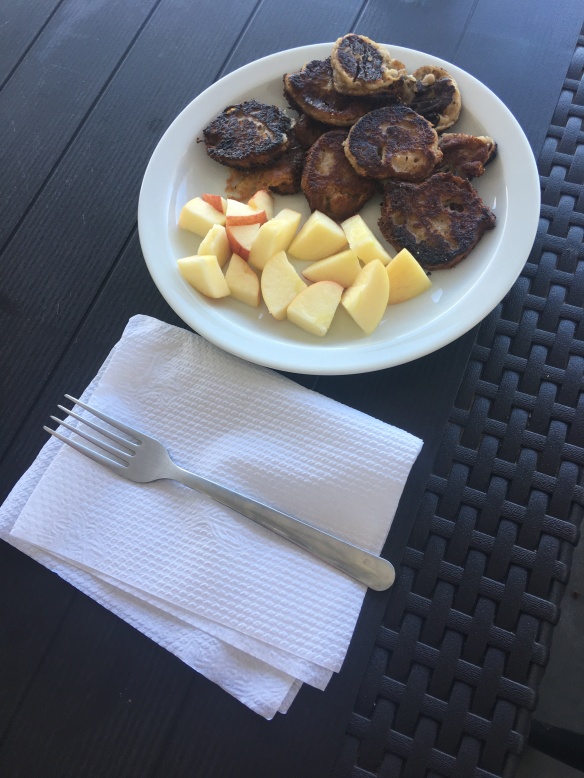 A Nicaraguan breakfast of plantain-and-peanut-butter fritters plus apple. Did you know apples can be grown in Central America? Neither did I.

Weekdays, Martin eats lunch at his camp. That development—eating with the other kids, and mostly what they eat—has been huge for Martin, who’s wanted all year to buy lunch at his school back home, which, of course, would be inconceivable: Have you seen U.S. school lunches? Here, at the camp, lunches are prepared fresh from organic ingredients, many grown on site, with focus on health. I met in advance with one of the camp directors and asked that they respect Martin’s dairy and beef allergies, and that he not be permitted to eat any gluten. No problem, they said. The directors reported that, for the first week, Martin had “lunch worries” and needed to be persuaded each day, anew, that in fact he would be fed. At first, he ate tentatively, mostly Nicaragua’s famous rice-and-beans dish, gallo pinto, or even arroz unadorned.

The aftermath of Martin’s octopus, rice, and vegetables on the beach.

After the tentative first steps, Martin started taking advantage of everything offered. I mean, everything!, and that’s brought some slip-ups. Even though I pack healthy snacks, he wants the snacks the camp keeps on hand for all kids, which include popcorn, commercial yucca and plantain chips (fried in who knows what sort of refined vegetable oil), French fries, popsicles with food colorings and refined sugar. I don’t like the snacks aspect but am resisting the urge to make the camp pull back; eating at camp, plus the wide availability of fresh seafood and vegetables in Nicaraguan restaurants (not much pizza or pasta getting in the way), seems to be helping to reduce Martin’s food-related anxiety. I hear less, “Can I eat this? Can I eat that?” and more, “Hey, do they have octopus? How about rice?”

We are, however, in something of a popsicle crisis. Now that Martin has tasted a frozen refined-sugar stick, my homemade frozen-fruit popsicles just aren’t cutting it anymore.

This is a “fancy” breakfast, like we have when guests are eating with us: pancakes and potatoes cooked with shredded vegetables.

The overall picture is that Martin has been eating 93.6% well, and 6.4% sugar and junk food. When I say sugar, I mean those aforementioned popsicles but also potatoes, rice (which also brings arsenic), and fruit. The fruit includes a daily smoothie from our favorite smoothie stand. Martin selects the three fruits he wants (usually pineapple, mango, and lemon), while from behind him I mouth “¡y aguacate!” to the smoothie-maker so that he’ll throw in some avocado, too. Martin professes not to like avocado, so I have to get creative, like sneaking it into a smoothie.

A few weeks ago, I discussed the situation with Martin’s doctor back home. Too much sugar, I confessed. A whole lot of fruit. Smoothies every day.

“Some of it directly from the fields,” I replied.

Another breakfast, this time plantain-and-egg pancakes with pineapple and raw energy bars that I made from almonds, dates, limes, and shredded coconut.