On the offhand chance you haven’t been tracking this yourself, I can tell you that these are the most recent mentions, on this blog, of yeast:

Years ago, I wrote about yeast constantly. I called it the “yeast beast” and lamented its repeated torment of Martin. Every time I thought we had yeast under control, I’d see a “fluffy” bowel movement, or the characteristic rash would emerge again.

Martin still takes Candex, which was the product that (I think) finally subdued his candida. I’m not ready to add yeast to the So Far Gone list, but for now, it’s gone enough.

Parasites think the disappearance of candida has given them an opening to fill.

Martin passes a lot through his skin. As of late, a lot of what passes through Martin’s skin looks like parasite activity is involved.

On the morning of June 10, just after we returned from a few days in California, Martin woke with a collection of strange bumps on his left forearm, many of which he’d already scratched raw. They looked like tiny insect bites, as if a single bug had crawled onto Martin, wandered about a small area eating its fill of flesh, and disappeared, or as if a bunch of bugs had assembled, used the arm as a buffet, then dispersed and gone home. 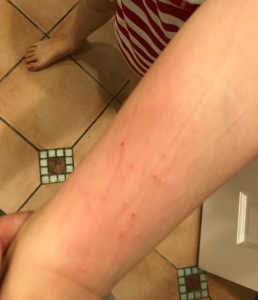 Martin’s arm hadn’t shown any evidence of this the night before. I tore apart his bed, searching for a spider nest or other den of revulsion. I found nothing.

By breakfast, when the fresh scratches had faded, the bumps started to look like a rash.

Martin said the bumps didn’t hurt, and didn’t itch (anymore?), but he wouldn’t let me touch them or examine them too closely. “It’s fine. I’m fine,” he said, tugging his arm away.

What the heck? Martin wakes with an odd collection of angry bumps, within a few square inches of skin, with no evident cause, which he then claims are not bothering him? In usual circumstances, I would attribute this to a mystery insect and move on. This year hasn’t been usual circumstances, though. At least not when it comes to parasite activity.

A week before the mystery bumps, I had posted about the condition of Martin’s arms and legs. With his skin such a mess, I was forced to consider whether parasites could be at work—again—already—just a few months after the anti-parasitical drug Alinia had reduced Martin’s itching and his inappropriate comments. I took Martin back to his New York biomed doctor, who agreed with my assessment. Parasites. Dad-blasted parasites. The doctor prescribed another round of Alinia. I avoid using any pharmaceuticals with Martin—we used nystatin once, for yeast, and it made Martin’s behavior bonkers—but the Alinia had worked so immediately, earlier this year, that I agreed to try the drug again. We did a first round while still in the States, and the second round here in Costa Rica.

If anything, Martin’s limbs are looking worse than in June. These are current photos of his legs:

We spent years getting candida under control. I’m hoping parasites don’t mount that kind of protracted offensive. So many factors are at play. The New York doctor contends that we need stronger chelators, that parasites cannot be finished off while the body carries too great a heavy-metal load. (We know, based on hair analysis and other testing, that Martin has trouble excreting heavy metals. We use chelators including prescription DMSA, oral Liposomal EDTA, algas, and Bioray NDF Plus. I’ve never agreed to IV chelation because I consider it too harsh.) Heavy metals may be playing a role, but I also need to look at the ways I enable parasites to infiltrate Martin’s defenses. I try to be careful about what products we use for cleaning, and certainly Martin doesn’t have amalgam fillings, as I once did (and probably passed a significant portion of my toxicity to poor Martin). But Martin still eats fish, lots of fish (even if I am continually trying to keep him off raw fish). My friend Stacey re-washes vegetables labeled “triple-washed.” I don’t do that. I let Martin play in tide pools and swim just about anywhere, like at the river mouth with his day camp. And no amount of modeling, instructing, helping, begging, or pleading has yet got Martin to wash his hands properly. He prefers to make an impatient mess by rinsing his hands and shaking the water off.

In short, there are ways I can step up my parasite-prevention game, even as I keep on my parasite-elimination game through, for example, regular use of diatomaceous earth.

Two months later, Martin’s forearm still shows the remnants of the many bumps. Metaphorically, that means I’ve got to roll up my sleeves and get to work.

One thought on “Yeast Defeated (?), Another Beast Rises (?)”